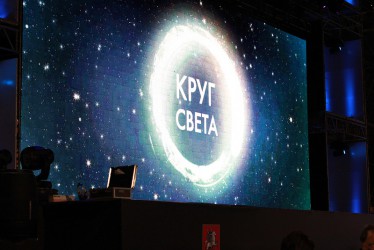 The Circle of Light in Moscow

This year, “The Circle of Light” festival in Moscow celebrated its second anniversary from September 28 through October 2. As he had done during the inaugural year, Dmitry Malikov was Chief Musical Director of the event. On October 1, his performance at the Central House of Artists highlighted a unique show, “The Music Box”, that combined several expressive forms – art, graphic design, classic ballet, music, and contemporary lighting concepts. This project had brought together artistic minds from different countries, who dreamed up vivid visual exhibits using state-of-the-art technologies such as video mapping, lighting installations, computer 2D and 3D graphics, and special effects. And of course, uniting all these creations was a world premier performance of the new piano collection by Dmitry Malikov.
During the festivities, Dmitry’s music greeted visitors to the Gorky Central Park, where the main entrance was adorned by the exhibit titled “Essence of Light”. The final chord of the celebrations was the closing ceremony at the Pushkin Embankment, accompanied by maestro’s music. It encapsulated the astonishing variety of artistic and musical events during “The Circle of Light”, reflecting in the light of beauty, love, and the human soul.