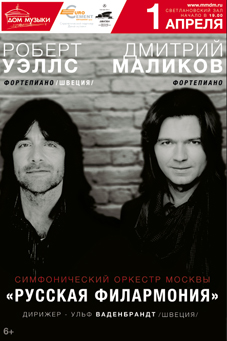 On April the 1st Dmitry Malikov will be performing at the House of Music. The Russian musician will be joined by his Swedish colleague Robert Wells. Robert is not only very well-known in Scandinavia, but he is also performing to full houses all around the world and has even written music for the 2008 Olympic Games in Beijing. The unique concert to be given by these two classical crossover pianists will feature the Moscow City Symphony – Russian Philharmonic directed by the Swedish conductor Ulf Wadenbrandt. There is no doubt that all connoisseurs of music will truly enjoy this artistic competition between the two professionals.
Buy tickets at the ticket offices of the Moscow International House of Music and at the City Theatre Ticket Offices, or book by phone 8 (495) 730-10-11