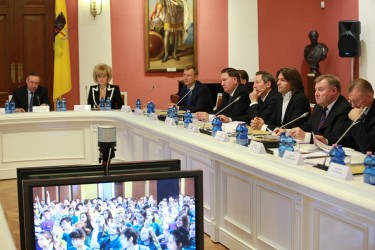 On November the 5th Dmitry Malikov visited Yaroslavl. For the first time ever, the musician did not come to the city to give a concert, but to attend a meeting at the Council of the Russian President’s Plenipotentiary Representative in the Central Federal District which gathered the heads of 18 regions of Russia. During the two-hour meeting where matters related to the social well-being of the public were discussed Dmitry presented a report on the situation with musical education for children. The musician has a lot to say on this matter, since he dedicated the entire year of 2013 to work on the “Lessons of Music” project and has held 55 master classes in various Russian cities. Over that time more than 600 young musician have had an opportunity to perform with Dmitry on one stage and more than 30 000 children undergoing primary music education and their teachers have attended the “Lessons of Music”.
While in Yaroslavl, Dmitry Malikov also attended the “Future Intellectual Leaders of Russia” Forum and awarded diplomas to gifted children. 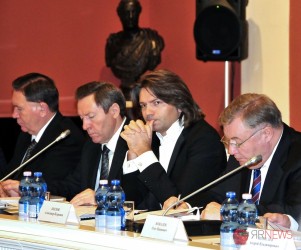