A Special State of Mind | Interview 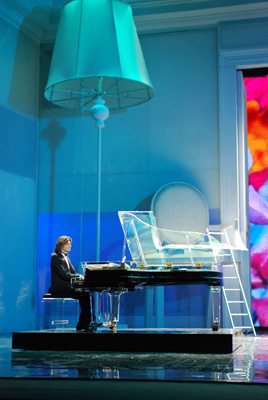 Composer and singer Dmitry Malikov does not need any introductions. He has millions of fans. His every new song becomes a hit. His performances at the best venues of the country invariably draw a full house. His works are performed by the most popular Russian artists.
However, Dmitry is far from being content with his achievements. Recently, our compatriots witnessed the start of his massive project, PIANOMANIA, which makes Dmitry Malikov’s talent sparkle in an entirely new light.

- What exactly is your new ‘PIANOMANIA’ project?
- Music for me is a huge part of my life. All my external manifestations and inner experiences are structured around music one way or the other. It is for me an instrument, as it were, helping me convey to the outside world the ideas and thoughts that I have about the world around us and, thus, be part of the processes transforming it. And so, it naturally became clear to me at a certain point that, despite all my love, all my respect for “vocal based” music, this genre had become somewhat confining for me. Because the thoughts and experiences that I wanted to share at that point in my life were very hard, or rather entirely impossible, to express through a song, leave alone a pop song. And, as a result, I decided to go for instrumental music, since by its very nature it is much more suitable for experimentation, it lets you look for and find new ways of expression, and to speak about such universal things as love, be it love for a woman or the world as a whole, the civilization, or the Universe. This was how I first had the idea of РIАNОМАNIA, a project combining several genres at once. What came out was some sort of a fusion of arts, it includes elements of ethnic art, a theatrical performance, elements of video art, and acting, and, of course, the music itself. My goal was to get all those creative elements to complement each other, naturally flowing from and into each other, interlacing and combining into something entirely new and beautiful.

- Is this project your own brainchild entirely or has it been developed in creative cooperation with other people sharing your ideas?
- I can say, not without some pride, that PIANOMANIA is, from start to finish, entirely my own idea which has been ripening in my head for many years. This project is driven by a lot of my ideas and ambitions, as it were, as a professional. Today, after 20 years of my creative career, I definitely feel that I have accumulated a huge experience using which I can make a statement not only as a pop singer and songwriter, but also as a classical composer, instrumentalist and producer capable of creating a major work of art.

- What will this project be based on?
- Of course, first and foremost here is music. Music with a capital M. I will use a wide selection of instruments to create music for this project, from classical piano to ethnic drums. The repertoire will also be quite extensive: from classical works by Rakhmaninov, Chopin, Khachaturian, Prokofiev to my own works. And as background for the music we will have video installations, light shows, ethnic performances, etc. In a word, there’ll be quite a wide variety of creative styles. An important element of PIANOMANIA is, I believe, that it is not a static program featuring numbers and performers, which are once and for all determined. Quite on the contrary. Anything is possible here, since by the very fact that a listener’s attention is in no way focused upon a particular text and, thus, is not confined within some narrow limits of perception instrumental music allows for using any form of presentation. Be it the physical elements such as the venue chosen or the size of the audience, or the creative aspects such as the repertoire, the performance style, or the visual effects.

- Does this project, this new performance style mean that you are dropping your pop music work entirely?
- Not at all. The pop facet of my work is still as important to me as before. I hope that I will continue creating popular hits. But who will be performing them, myself or some other singer, is quite another matter entirely.
My new project does not mean that I am disappointed with the Russian showbiz and that I am looking for some other way of continuing my career. I can’t say that. I have always been and still continue to be a member of the pop music community. 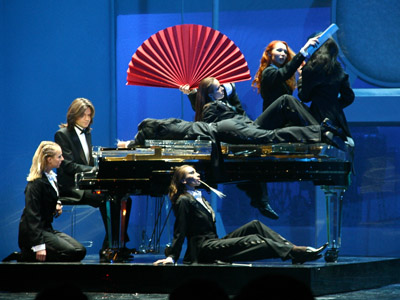 - Aren’t you afraid that your “pop” alter ego will play a trick on you, and the PIANOMANIA project will not be as widely recognized as your songs?
- Let’s start by saying that I am not going to start any direct rivalry with Dmitry Malikov, the pop singer. At the very least, because I quite clearly understand how difficult and unrewarding this task is. The popularity of pop songs as a genre resides in the fact that they cater to the tastes of a very large audience.
On the other hand, the music that we are talking about today is not for everyone. You can not listen to this music between commercial breaks, you can not drink a cup of coffee listening to it and then just go on with your daily routine. This music is the reflection of a special state of mind requiring some special forms of expression. It is important for me that this music must not be seen as some sort of an audio background. This is not the kind of easy listening music that can be used in a caf? or a shop. I would even prefer that it is not listened to in a car, despite the private space feeling a car interior usually has. And all this because PIANOMANIA music is for when you are in that “special state of mind”. I will be completely honest here, I do want as many people as possible to really discover my project. And I believe this is quite possible to achieve. If the audience is given a project presented in a really unique, talented and original way, but all the same staying true to the “simpler the better” formula, I am sure that it will have its fair share of fans and admirers.

- Creating a work of art is, despite all the deeply creative effort involved, still intrinsically a craft of sorts. Since, apart from being able to generate ideas, an artist has to possess the mastery, the technical skills necessary to bring them to life. How important do you think the role of craftsmanship is in your PIANOMANIA project?
- I think that, first of all, we should draw a clear line between performing skills and writing skills. Craftsmanship, and by this I mean a job done to a high professional level, is almost the most important element of the work of a performer: a singer or a musician. A performer must exercise his or her craft on a daily basis playing exercises and the works on his or her repertoire, thus perfecting his or her skills. But with writing, on the contrary, “content” always takes precedence over “form”. And “content” cannot be perfected, however virtuoso the performance. Of course, there do exist some professional “recipes” for writing too, but with the PIANOMANIA project I have taken a firm position where the only pieces that I include there are those written purely on inspiration without using any professional short-cuts. It is very important for me that all the music played at any of my concerts is always beautiful and live, in every sense of that word.

“Artistic creation, as I see it, is a union of sorts of the mundane world physically existing around us and our inner world, a spiritual space, unique and different for each of us. That is why I think the art of creation is what we call a Divine Gift giving us the ability to change the existing reality, to find something positive in it even in the most difficult situations and to draw the people’s attention to those positive aspects thus making their lives better, kinder and richer, and, as a result, to really change the world for the better. I am convinced that art determines, to at least the same extent as, say, science, the general trends and ways in which civilization is developing and, for this reason, we must approach art in a very conscientious and responsible manner”.