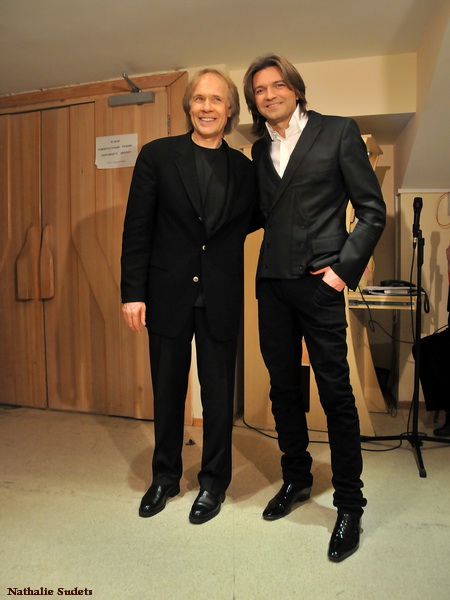 On the 8th of March women were celebrated at the Svetlanovsky Hall of the Moscow International Music Home by Richard Clayderman (France) and Dmitry Malikov (Russia) performing their joint program “The Melodies of Love”. Two segments, two pianists. Both perform a style of music which is on the border of the classical and the pop genres.

Unlike “pure” styles, crossover is a style which is destined to be popular. Crossover helps musicians to acquire some sort of aristocratic flair (and for quite a good reason) and the audience to consider themselves (and be much less justified in doing so) as having sophisticated and even intellectual tastes. Crossover is easier, more accessible than any “pure” style. To some extent, it is but a secondary product, but that does not necessarily mean that it is in any way worse.

The first segment: on stage, Richard Clayderman and musicians with string instruments. The piano is in the centre, but for some reason at the back of the stage, and Clayderman has to cross the entire stage to get to the microphone each time he has something to say to the public.

“Marriage D’amour”, “Ballade Pour Adeline”, the theme music from the movie “Love Story”, all these pieces are so tightly linked with Clayderman’s name that it almost seems that he has written them himself. The sound is beautiful and traditionally crystal clear, but all the pieces performed are so like each other in style and harmony. Three chords alternating, and outros repeated like a refrain in a manner typical for pop music. Perhaps, this monotony is there because of the use of backing tracks? Only piano and string instruments are played live. The drums, the electric keyboards, the harp and even the vocals are all pre-recorded. Of course, bringing everything necessary for a fully live performance all the way here should not be an easy task and, if anything, should cost quite a fortune, but still, alas, the performance felt a bit too phony. There is no way to make a substitute product look completely natural. A pre-recorded track is playing and Clayderman invites the audience to clap in time to the melody, and they are happy to comply. A product must be sold at all times. Perhaps, it is the only thing that matters here. Or is it really?

It’s only when the segment is drawing to a close that the style of the performance changes, they start playing “Sir Duke” by Steve Wonder. Applause. Flowers. The show is over.

The second segment: Dmitry Malikov with his supporting band and the same musicians wielding string instruments. But this time all the musicians take their places practically at the front edge of the stage and this creates a stronger feeling of intimacy and unity with the audience. The concert opens with a piece called “Altai” from Dmitry’s first instrumental album “Fear of Flying” (1997), but the backbone of the program is “PIANOMANIA”, the album and the eponymous project which was a huge success several years ago: “Night In Madrid”, “Lola”, “Stephanie”. The main musical theme from the movie “And yet I Still Love”. Unlike Clayderman, the harmonies here are diverse and the melodic solutions are ingenuous.

The classical section includes Chopin’s Waltz in C-sharp minor and the 1st part of the famous Concerto for Piano and Orchestra No. 1 by Tchaikovsky. At first, a hush falls over the audience, but then, as if acting on a sudden, unexpected impulse, they erupt in applause. 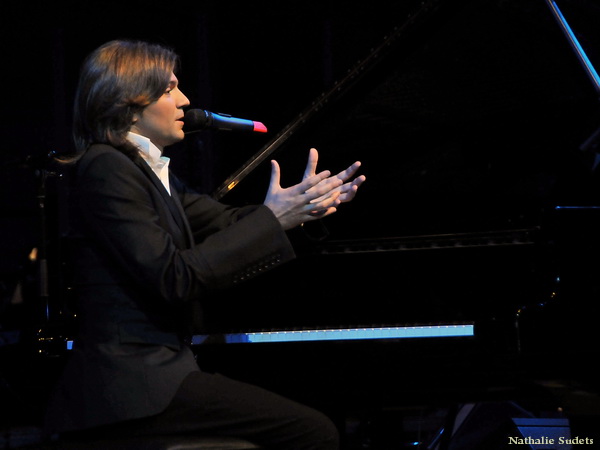 Dmitry is playing accompaniment to a selection of still frames displayed one by one on a screen above the stage: “Titanic”, “Ray”, “Pretty Woman”, “Singing In The Rain”, “The Phantom Of The Opera”, “Pulp Fiction”, “Evita”. Images from movies continue to parade across the screen.

Malikov only sings one song: “More, More”. And that much is quite all right: the singer’s voice is nice to listen to, but it is nothing exceptional. Malikov’s vocals are quite modest. There are a lot of singers like him, but versatile pianists and melodic composers as talented as he is are few and far apart.

Closer to the end of the show, the powerful “Montagues and Capulets” from Prokofiev’s “Romeo and Juliet” is performed. Again, there is a storm of applause from the audience.

Finally, the musician plays virtuoso variations on the theme of “Dark Eyes” and ABBA’s “Dancing Queen”, dedicating them to Clayderman. As a result, there is a standing ovation and a sea of flowers.

We had some reason to expect that the pianists would play together on two pianos. That would have been something really worth looking forward to. But it never happened. We didn’t witness a one-on-one situation this time. But as far as the indirect duel between Clayderman and Malikov is concerned, Dmitry Malikov was the undisputed winner.