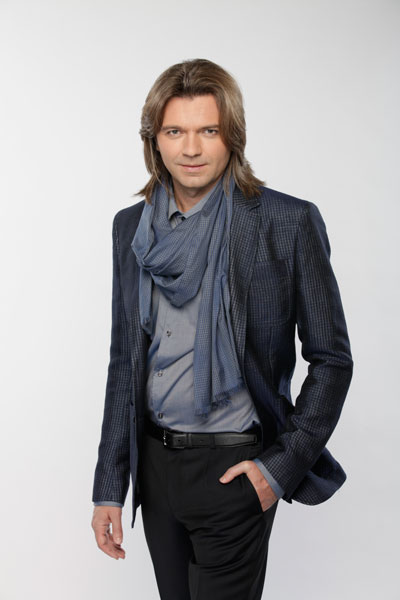 Dmitry, in June you will be celebrating a jubilee event: 25 years since you first went on stage and sung two of your songs. It was at the Moskovskij Komsomolets newspaper concert. Do you remember that performance?
I remember that the security were not letting us in, because nobody knew us then. I remember saying: “But we are artists!” And, of course, I remember the feeling I had when I walked on stage. Two things became clear to me then. When the audience started singing along with me after the second verse, I understood that those songs had potential. And when I saw girls smiling, I understood that they liked me. That also inspired me a lot, because when you are 18, you feel good when you are liked by the opposite sex.

It feels good at any age, not only 18.
But it’s especially good when you are that age. However, I never thought that I would be a singer. I was writing songs for “Samotsvety” at that time, and Larisa Dolina took one of my songs. But it happened so that several songs that I had written and recorded were distributed though recording studios and became popular. Obviously, the pop scene needed new faces and names at that time and my debut just happened right on time to take advantage of that trend. People liked both my songs and my stage character as a young, na?ve, romantic boy from a decent family. All the girls were dreaming about me and their mothers were quite all right with that. I was admitted to the conservatory and simultaneously started touring. I started performing at big venues such as stadiums, sports palaces. All this was happening naturally, since there were no special methods to promote an artist at that time.

However, you were shooting videos.
The first video was made in 1986 or 1987 for the song Sooner Or Later before my first stage performance. The video was directed by Mikhail Khleborodov who later became a famous film director and music video maker. Our parents were friends and we also worked together when we began our respective careers. The video was shot at the VGIK studios. The song was ambitious and tough, and even then Misha’s approach to editing was similar to his signature style, rather brusque. Eventually, the video was never publicly released. I later found this recording and posted it on the Internet.

Was there a point when “you woke up famous”?
This happened on January the 1st, 1989. I was participating in the New Year TV show “Novogodny Ogonek” and had written the song “See You Tomorrow” especially for that occasion. The next day Sasha Shaganov who wrote the text for the song called me and said: “I was in the metro today and saw a boy saying bye to a girl. Do you know what he said? “See you tomorrow, do not say words of farewell”. Looks like we have written a hit”.

You have released 13 albums since that time. Do you want to tell the story of how you created any of them?
Maybe the last one. This was an instrumental album called PANACEA. It all started when I was given a quality grand piano as a gift. My friend Vladimir Matetsky then surmised that that instrument would lead me to new creative achievements. I sat down and wrote 13 piano preludes that I decided to combine into a cycle. And simultaneously I started thinking about the name that I should give to the future album. It’s a known fact that any music, and especially good music, has a therapeutic effect. It helps reduce blood pressure, improve the overall emotional state, and brings harmony to life. Whenever we feel bad, we go and listen to music. When we feel good, we also turn on the music and start feeling even better. And I thought of such name as Panacea. Designer Alexei Malina helped me with the graphic design: we imagined a magic white pill divided in two halves by the keyboard of a grand piano.

And then what?
Then we had to combine all the pieces into a cycle. I found a poem by a Moscow poet, Yulia Donskaya: “Deeply in thoughts / About the rush / About the past / About the impossible / With a breath of music / Happy / I become / The shadow leaves / The soul is filled / Fresh/ I am alive / I am happy / I feel good”. I used each line as a name for a song. Then I had by far the most difficult task, that of framing this music, making it sound as it should. Given the medicinal nature of the album, I found an original solution: we started selling Panacea at pharmacies.

When are you planning the release of your next album?
This year I am going to release two albums, one with songs and the other with instrumental music. Instrumental music is something that lets me relax. Song writing makes you use specific forms, take account of the kind of audience that you are working to satisfy, but with instrumental music I am completely free. I do what I like and take immense pleasure in it. Freedom in general is a big luxury.

How can a composer make himself write light-hearted music at times when he is distressed or is suffering?
To manage that, music must be simple and melodic. Not many people are interested in dramatic or, even more so, tragic music. Everything must be easy-going. But writing such music is far from easy.

Do you like complex music?
I like the sound of Mahler’s Fifth Symphony in Visconti’s Death in Venice. And I find that Wagner’s Isolde’s Death is perfectly fitting in Lars von Trier’s Melancholia. I think that it’s hard for people today to perceive music in its pure form. They need something to frame it. I have been thinking a lot about that. That was why my Pianomaniя Classic musical project based on popular classical works from various genres is also a spectacular performance featuring an orchestra, a choir, a ballet. We were as many as 150 people when we were touring. The concerts were a great success, not only in Moscow and Saint-Petersburg, but also in France. And right as we speak, I am thinking about other places where this program can be shown. I am attracted to South-Eastern Asia. There is an interest in Russian music, both classical and modern, from the audience there. 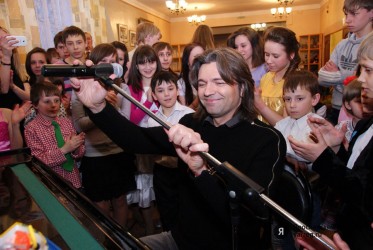 Lately you have been traveling around Russia a lot with your Lessons of Music educational project. How did you come by that idea?
I am concerned about several things. First of all, it’s the cultural education of our youth, as strange as it may sound. Secondly, the waning prestige of the trade of a musician. People no longer want to be trumpeters or violinists, they want to become lawyers or bankers. Naturally there are purely economic reasons for that. And, of course, it’s a problem. I want to use every occasion to tell children how important it is to love music. The Lessons of Music is a master class, a lecture, a lesson, a performance, a concert and a meeting with the audience.
I would start telling funny stories from when I was a kid and then say that I am a father myself. I talk about my daughter, and about how I became the host of the ‘Spokoynoy nochi, malyshi!’ children’s TV show. And I say hi from Hryusha and Stepashka.

By the way, how did you become “Uncle Dima”?
It was by accident. A producer I know, Alexander Mitroshenkov, suggested that I try that saying that it was necessary to put my charisma to peaceful use. We agreed that I will do that during this year. And then we’ll see. So far I have been trying to push the script towards devoting more time to musical education. Plus I am in charge of activities for boys: handicraft, model planes.

Could you do something on TV on a regular basis?
I have to be seriously motivated to do that. I enjoy doing what I do, i.e. writing and performing music. But a TV host is a tricky trade. When you are hosting a popular show, everybody knows you. But once the TV set is off, you no longer exist.

When compiling its “99 Russian Hits” the Afisha Magazine chose your song “My Distant Star”. Do you agree with their choice?
Over 25 years the list of my hits has become rather long. They include such songs as “See You Tomorrow”, “My Distant Star”, “Your Are The Only One”, “From Scratch” and a dozen more. Each one of them may be chosen, it will make no difference. They’ve chosen that one, and that’s good. It is being performed at my concerts.

Do you have a song that people always ask you to sing at concerts, but you can’t stand it anymore?
I do have a song like that. It’s “Farewell, My Blonde”. I am trying to avoid singing it, but I do it if the audience really want me to. A flirty song, and a bit empty of real meaning, to my taste.

A question from one of your fans: “Do you believe in princes?” It’s a secret, but for her you are the embodiment of a fairy tale prince, romantic, restrained and handsome.
I used to believe in them when I was young. But not all princes make kings. As the saying goes, “If you like a painting, don’t get acquainted with the painter”. I hope that saying is not about me. I would very much like to feel that that youthful “princeness” has developed into a mature and wise, albeit still romantic and honest position.

How frequently do your fans write you messages on your website?
Not only on my website but in social networks as well. I read personal messages on my Facebook и Vkontakte pages and sometimes reply to them when I feel interested. Alternatively, Twitter and Instagram are primarily a source of impressions. But they also provide an opportunity to inform my audience of what is happening in my life.

Do your audience change as time goes by?
They are growing up. But still, pop music is a genre for the young. That is why I am trying to make my songs fresh, simple and easy to enjoy. I am a pop singer so I am not trying to be innovative. A song must have a good melody, be competently written and performed.
In that event, we would like to congratulate you on your successful implementation of that principle during the 25 years of your work.
In my turn, I would like to congratulate all the readers of Aeroflot magazine and all the passengers of Aeroflot Airlines with Aeroflot’s 90th anniversary. Despite the name of my fist instrumental album, “Fear of Flying”, I always feel safe when on board Aeroflot’s planes.

Interview by POLINA SURNINA, May 2013