Events
Russian Twitter Anthem
Dmitry Malikov, along with popular Russian rapper Dino MC47, recorded a song titled #Tyazhelovato, which was recognized by many Twitter users as an anthem of Russian Twitter. читать далее... 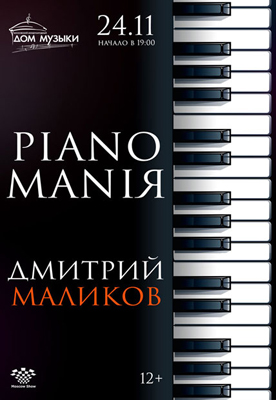 End of the year awards
In December 2015, Dmitry was awarded an Order of Friendship by the President in recognition of Malikov’s contributions to Russian culture. читать далее...
photo
INFO

Instrumental music is one of the important facets of Dmitry Malkov’s artistic work. Dmitry’s first instrumental works were released in 1993 on the “Come To Me” album. The two original pieces: “A Small Waltz” and “A Letter For An Album” were already really standing apart on that album. For many years after that, Dmitry had been getting ready for a full-fledged instrumental album. The “Fear of Flight” disc was released in 1997. The audience saw an entirely new Malikov. Instrumental music from that album is very frequently heard in documentary films and television programmes.

The next instrumental album, “The Game”, appeared in 2001. The disc was released in cooperation with Universal Music Russia. It featured immortal Soviet hits performed by Dmitry on a grand piano. By the way, at the Sochi Olympics the young champion Julia Lipnitskaya performed to Malikov’s piano interpretation of “You Don't Give Up On Love” by Mark Minkov.

Dmitry also writes music for films. His track record includes the TV series “But Still I Love”. He composed over 30 instrumental pieces for the series.

As many listeners acknowledge, Malikov’s music erases all borders between nations and generations and is a universal language easily accessible and understood by a vast majority of people.